On Wednesday, May 17, we launched NYCEDC’s .Incubator with a kickoff event at A/D/O in Greenpoint. The Incubator champions and supports the growth of 45 hardware startups across NYC and builds on the success of the New York’s Next Top Makers program. From smart basketballs to underwater drones, the city’s entrepreneurs are creating a new manufacturing ecosystem, and we’re bringing them all together. Below are the 13 growth-stage startups in our Manufacture & Scale cohort. Over the next nine months, we’ll be working closely with each team to help them produce locally, recruit talent, streamline operations, tell their stories and raise capital.

Futureworks Incubator is designed and run by global innovation agency SecondMuse and Chelsea-based Imagination in Space. Get to know the companies below as well as the 32 Market Validation companies which we broke out into these two posts. Join the Futureworks community to learn about subsidized production and contract manufacturing opportunities through Futureworks Shops. Or, follow along on Instagram and Twitter. 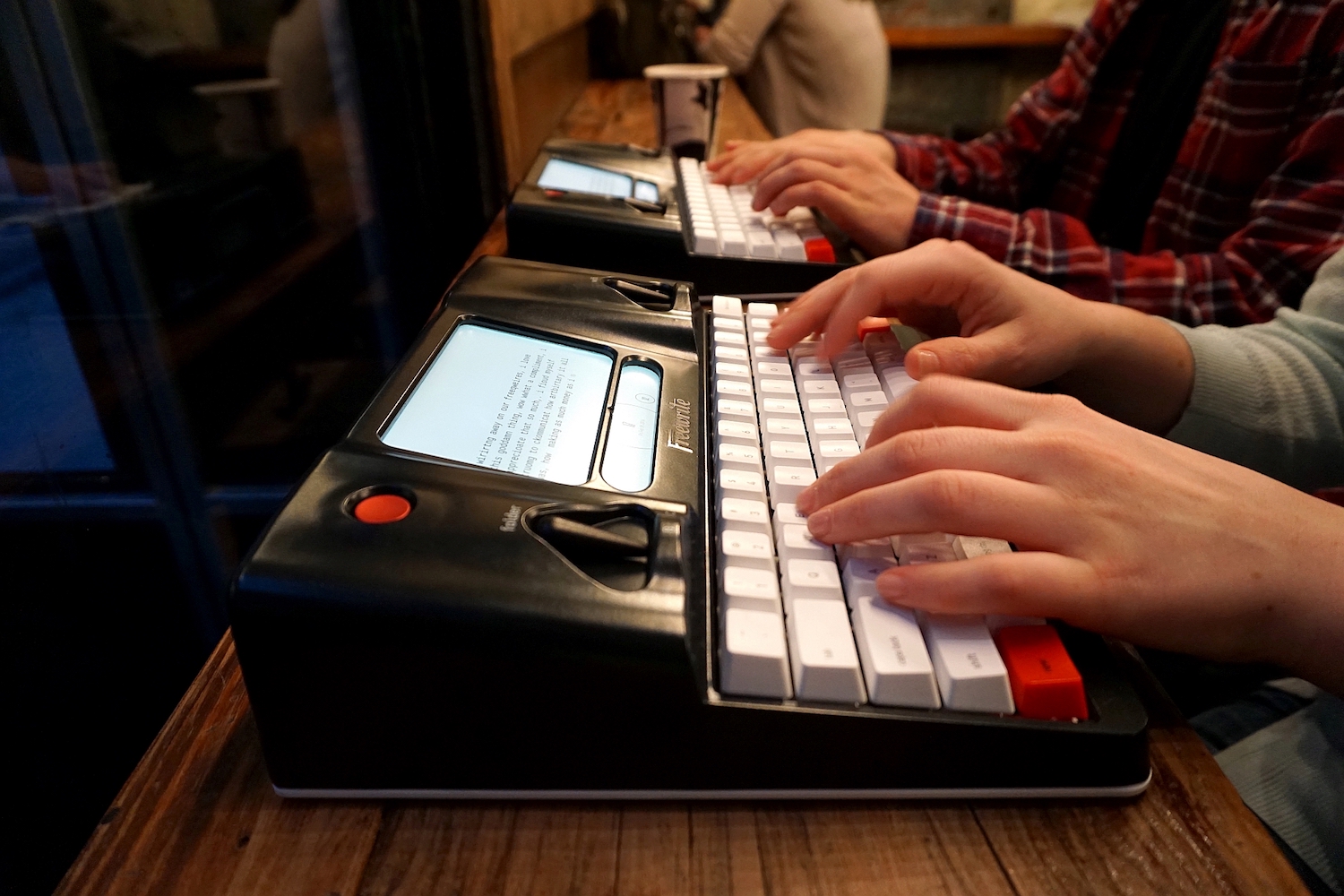 Astrohaus
Astrohaus is a New York City-based product-design company founded by Adam Leeb and Patrick Paul. In January 2015, they launched Freewrite, a smart typewriter with an e-ink screen, via a successful $342,000 Kickstarter campaign. In May 2016, Astrohaus shipped the typewriter to 1000 backers. Freewrite lets users write anywhere, sync their work online through the cloud, but without all the digital distractions like email and web-browsing that stop you from becoming the next Hemingway. It’s a tool for professional and aspiring writers and available at Amazon, Barnes and Noble and GetFreewrite.com. Today the Detroit-born company is a five-person team that’s refining Freewrite as well as designing new products like Sprinter, a distraction-free Web app. Get to know Astrohaus and join them on Instagram and Twitter. 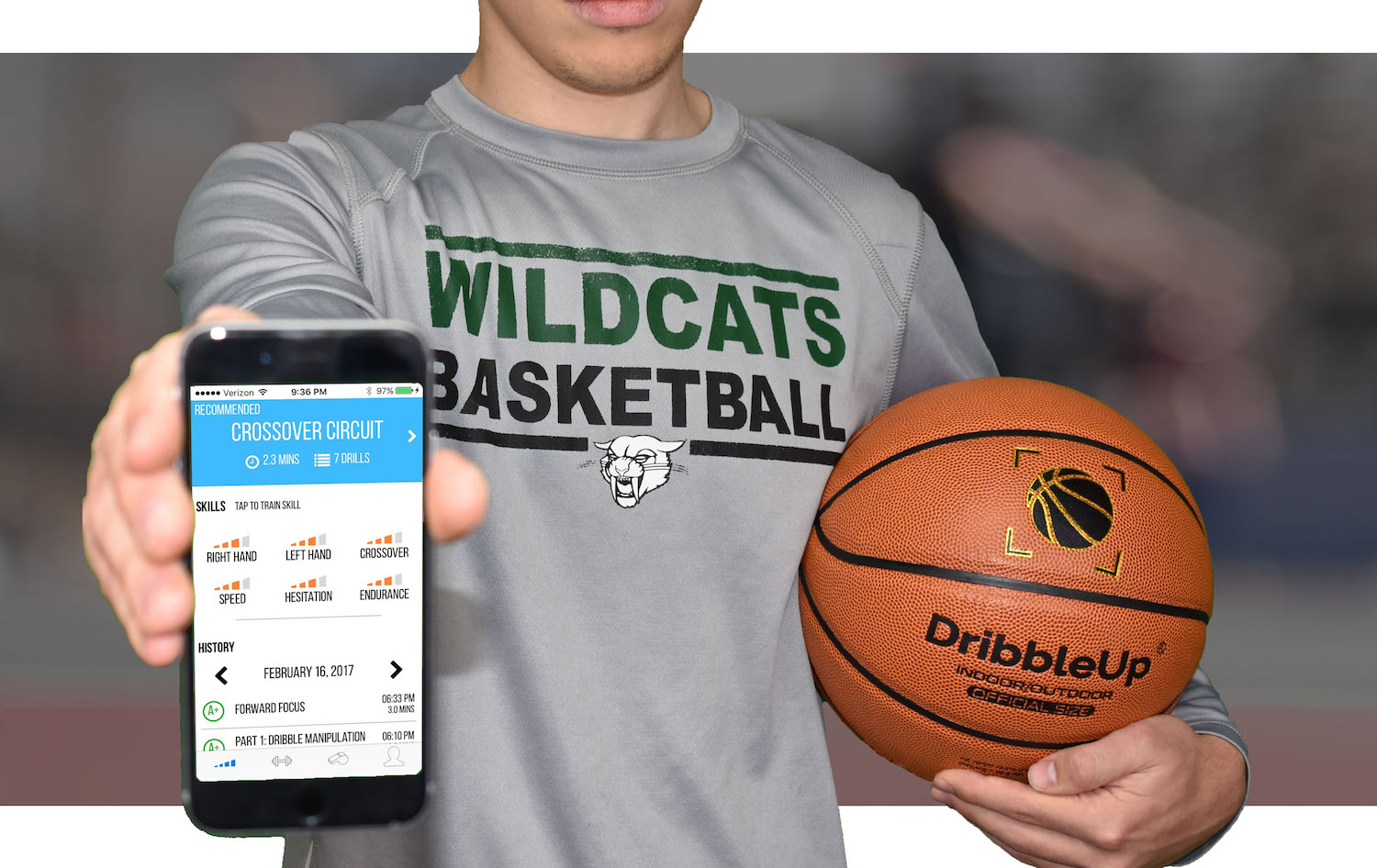 DribbleUp
When Cofounder Marc Forkosh was in 6th grade, he was cut from his school’s basketball team. Crying his eyes out, he came home determined to get better. He dedicated himself to hours of watching training videos and practicing in the driveway. Like most kids, he couldn’t afford a trainer and practiced alone. By the end of high school, he was captain of the basketball team. After graduation, it dawned on Marc: he could use his smartphone camera to track performance and give live feedback like his own virtual trainer. Marc, now 20, team up with his brother Eric, a former investment partner at Dorm Room Fund to invent DribbleUp, the smart basketball that helps kids like Marc train effectively and affordably anytime, anywhere. Since launching in August 2016, DribbleUp’s sold thousands of balls around the world and is the #1 smart basketball on Amazon. Get to know DribbleUp and join them on Instagram and Twitter. 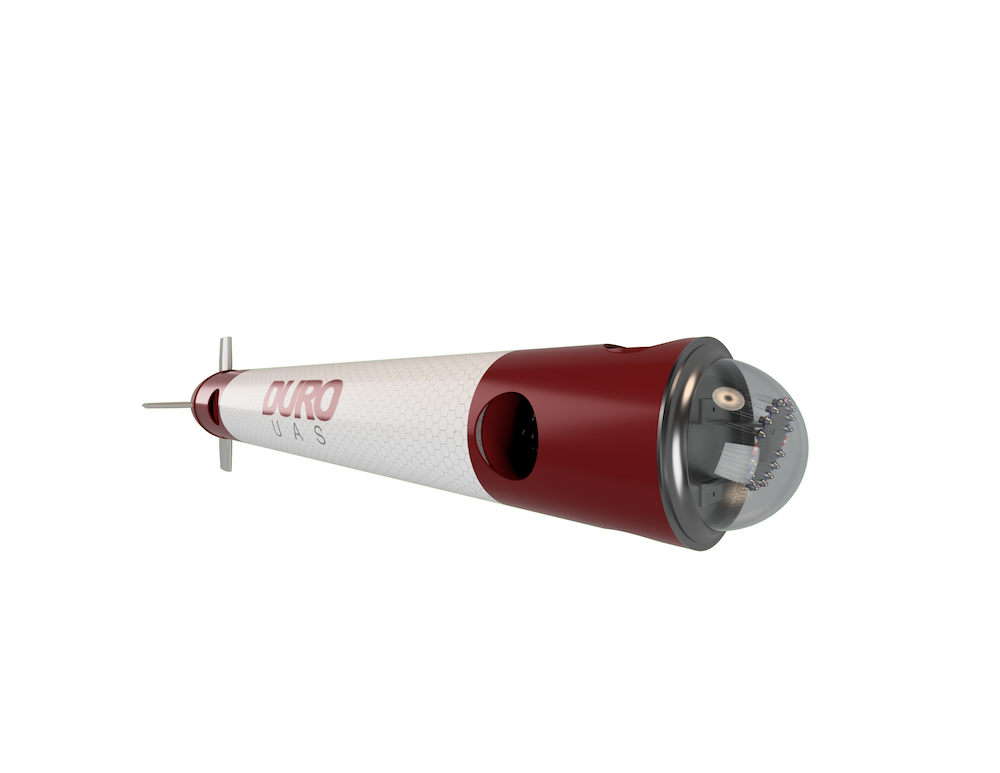 Duro UAS
Duro UAS (Unmanned Autonomous Systems) helps make cities safer by manufacturing underwater drones and components for infrastructure inspection, environmental research and more. Duro allows the government, scientists and companies to collect marine data that is cheaper, safer, faster and higher-quality than legacy methods in many circumstances, allowing for more of this critical information to be gathered and utilized than ever before. Well-connected throughout the city, Duro is currently performing a bridge inspection grant in partnership with a local college and the US Department of Transportation, and collaborates with organizations such as the Billion Oyster Project on mapping the NYC marine ecosystem, among others. Get to know Duro UAS and join them on Instagram and Twitter. 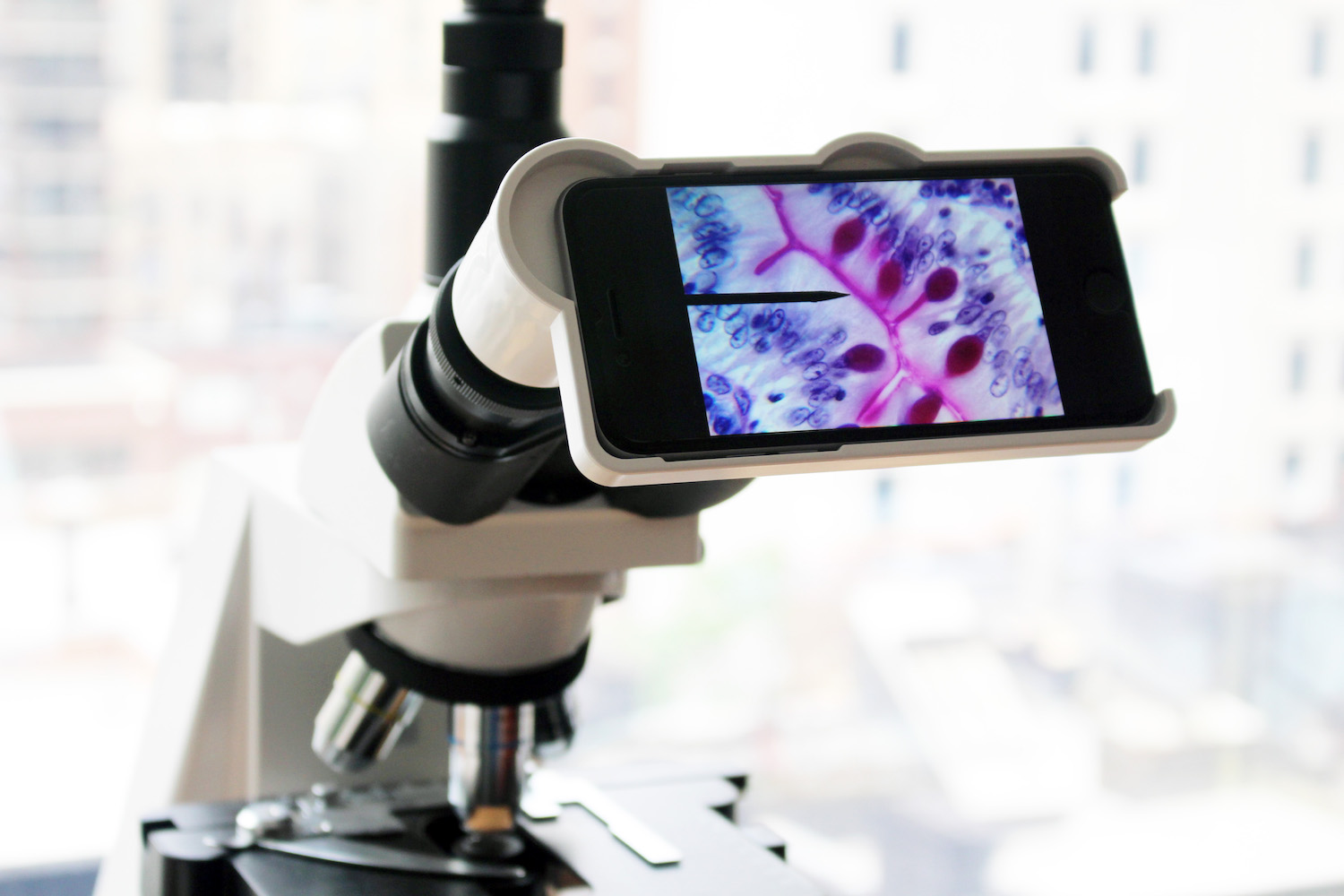 iDu Optics
Capturing photos and videos through a microscope is a basic requirement in fields like medicine, life science, education, jewelry and microelectronics. But image-acquisition systems are expensive ($5,000+) and complicated. iDu Optics’ LabCam is an iPhone clip-on adapter that lets people take high-quality microscopic pictures that are equal to, or better than, the $5,000 options. Harvard, Penn, Stanford and University of Chicago are all iDu clients, and Amazon reviewers give LabCam 4.5/5-star reviews. Founder Du Cheng is an MD-PhD student at Weill Cornell and iDu recently won the Weill Cornell Business Plan Challenge. Get to know iDu, see the LabCam in action and join them on Facebook. 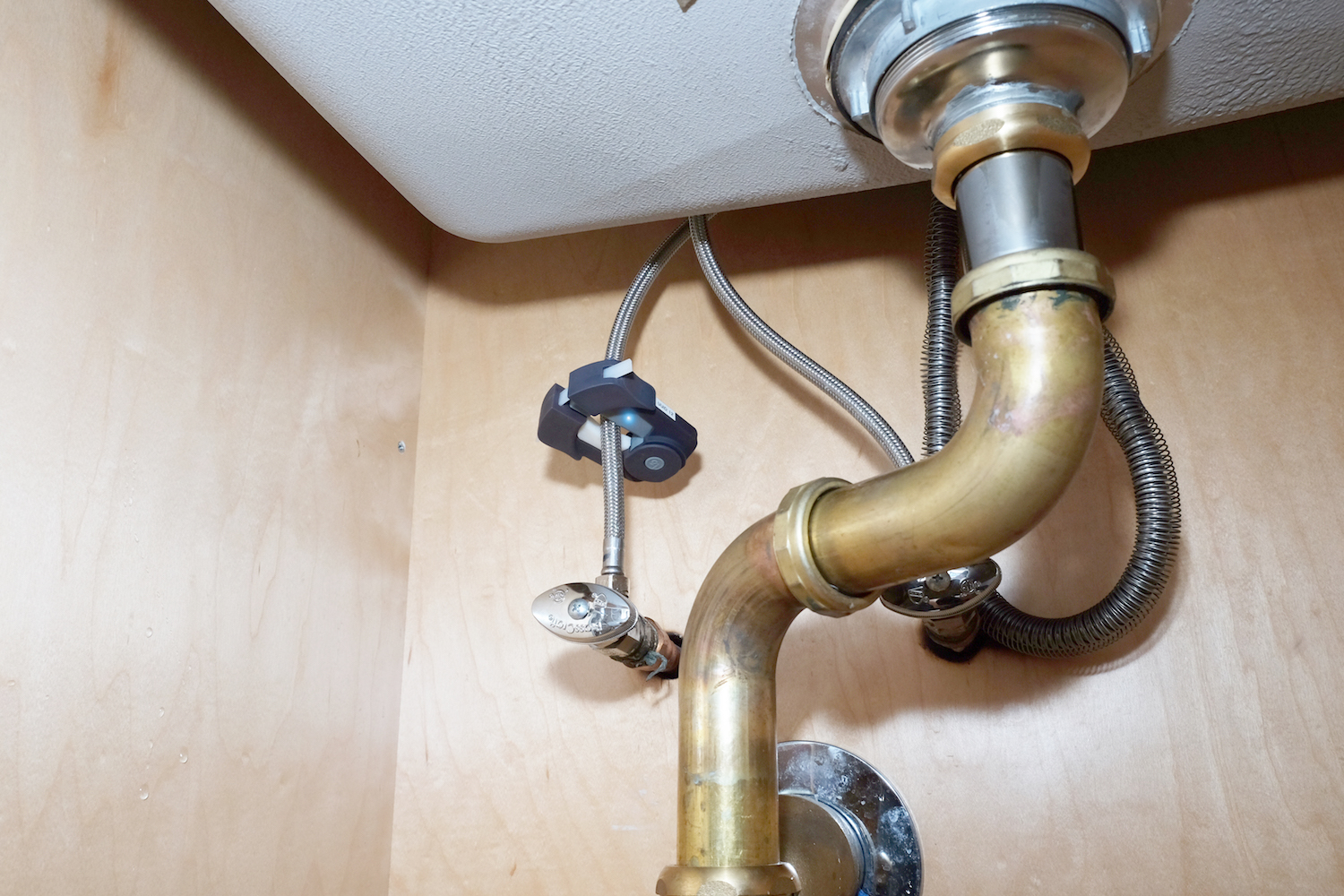 Lotik
Shane Eten and Ely Greenberg founded Lotik from Manhattan’s Samsung Accelerator in November 2015. Their objective was to create a wireless sensor capable of providing real estate owners a better understanding of how and where water was being used within their buildings. Lotik sensors provide real-time, point-of-use water data, and are installed on the outside of pipes. Unlike traditional flow meters, Lotik sensors can be installed in seconds and don’t require tools. When a leak occurs, Lotik lets clients know through text or email. They’re currently working with product-development firms, property owners and piloting the technology with Brooklyn Public Library. Get to know Lotik 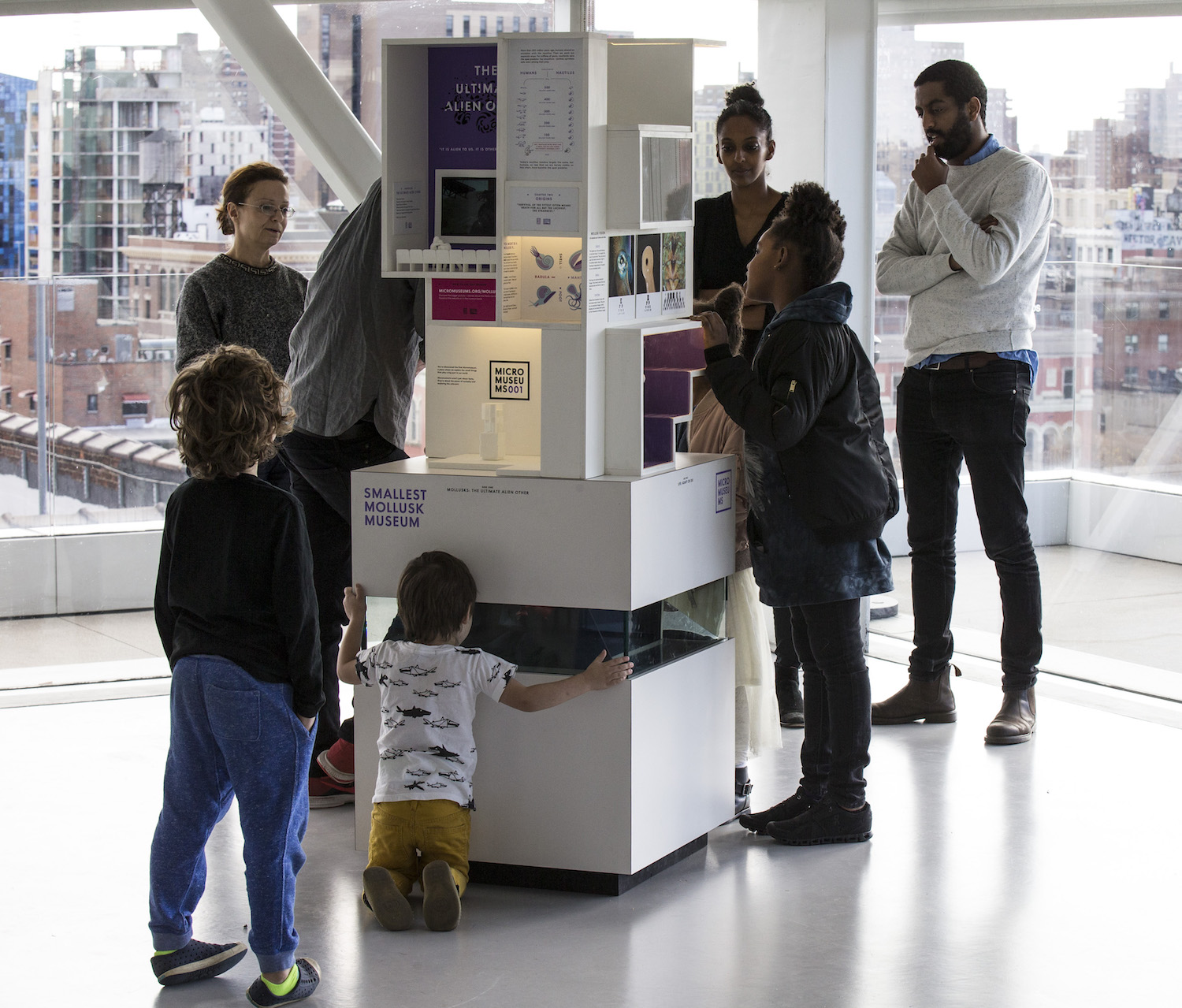 MICRO
MICRO is building a fleet of six-foot-tall science museums. Brick-and-mortar museums are clustered in well-resourced neighborhoods and entry is often expensive. Science museums, especially, are in high demand, but they’re rare. By creating a scalable museum model, MICRO brings science museums everywhere. They work with researchers, designers and storytellers to squeeze complex ideas into boxes the size of vending machines. In their first museum, the Smallest Mollusk Museum, the story of snails, octopuses and giant squids engage visitors in a 700-million-year battle to survive. MICRO’s showcased at the New Museum, NEW INC, New Lab, the Billion Oyster Project’s display house on Governors Island and the Submerge Marine Science Festival. Cofounder Amanda Schochet worked as a computational ecologist with NASA prior to starting MICRO with Charles Philipp, who spent a decade working as a media producer. Get to know MICRO and join them on Instagram and Twitter.

Olivia Knox
Olivia Knox is a manufacturing collective based in New York City and Uganda that specializes in Ankole horn. It is 100% female-owned and managed by Ugandan-American entrepreneur Olivia Byanyima and her American cofounder, Shanley Knox. Olivia Knox’s replicable model develops localized, effective industries around materials for use in global markets. The vast majority of cause­-oriented supply chains in Africa are built by NGOs and small individual brands. NGOs, while very effective in raising awareness, are not profit driven and therefore bring products to market at less than market value. Olivia Knox believes that creative industries in Africa can only be scaled through profitable businesses that price quality African goods competitively alongside Western products. Olivia Knox works with Selima Optique, The Line, Dannijo, Bloomingdale’s, Bird and Cage and Oscar De La Renta, among others. Their mission is to build out their manufacturing supply chain here in NYC. Get to know Olivia Knox and join them on Instagram. 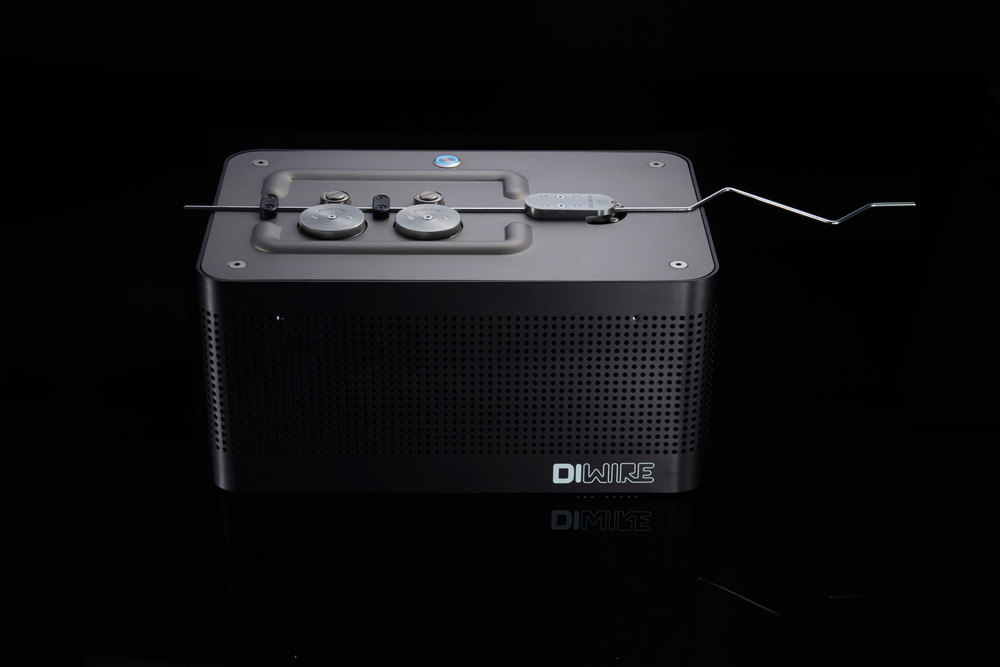 Pensa Labs
Pensa Labs is the brainchild of Pensa, the Brooklyn-based design firm with a track record of developing successful products, brands and strategies. Pensa firmly believes that the world can be continuously improved through understanding people and providing them with great design and a bit of clever invention. Pensa Labs’ D.I.Wire allows for mass customization or short-run production of wire forms. Currently, forming wire for medical or industrial applications is either time consuming, expensive or requires high minimum-order quantities. Get to know Pensa Labs and join them on Instagram and Twitter. 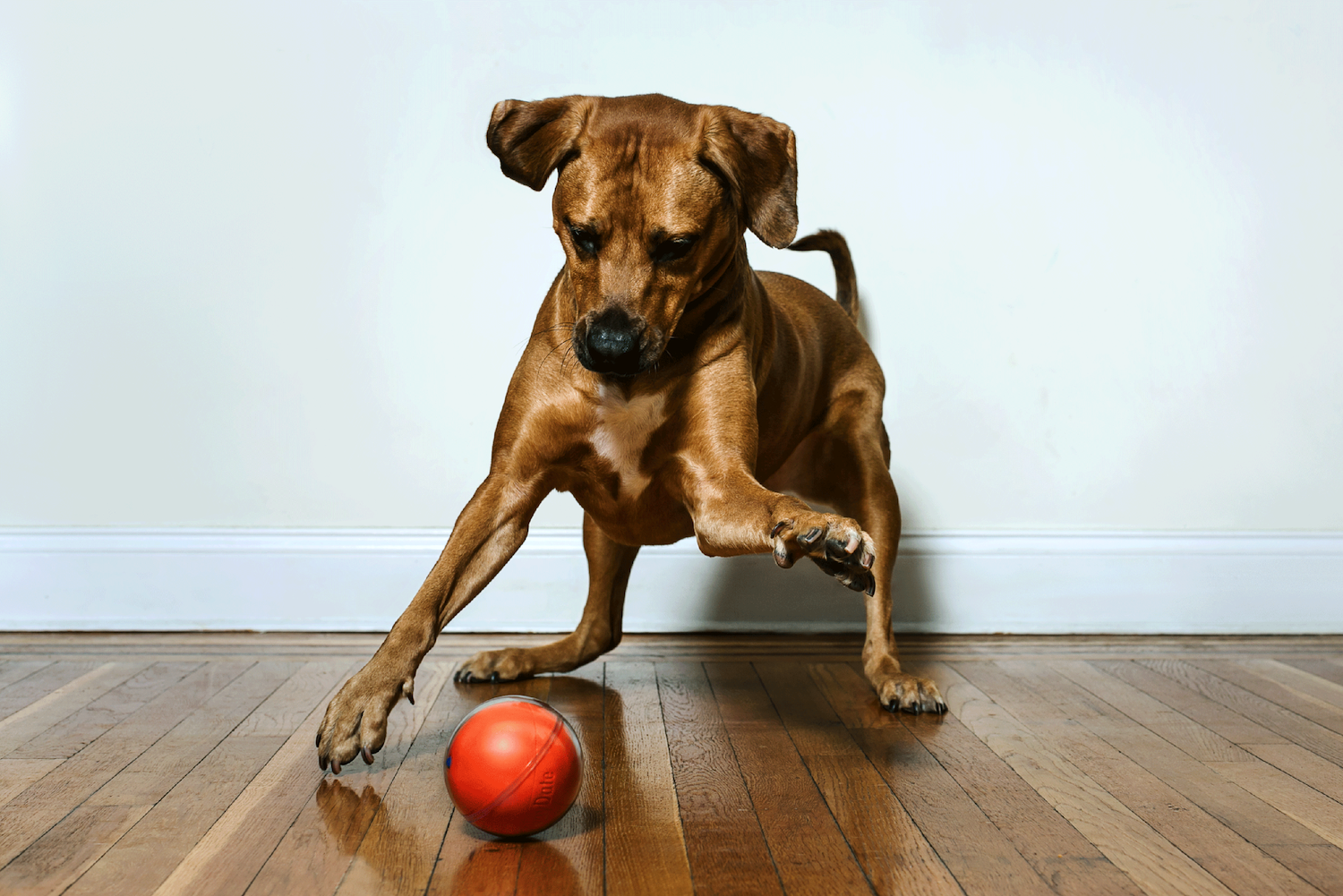 PlayDate
PlayDate is building out technology for pets and their owners. PlayDate’s first product is a camera-enabled ball that lets pet owners interact with their dog or cat from anywhere in the world using their mobile app. They’ve raised more than $800,000 on Indiegogo and are the highest-grossing pet technology campaign to date on any platform. PlayDate is a graduate of the Entrepreneur Roundtable Accelerator. Get to know PlayDate and join them on Facebook. 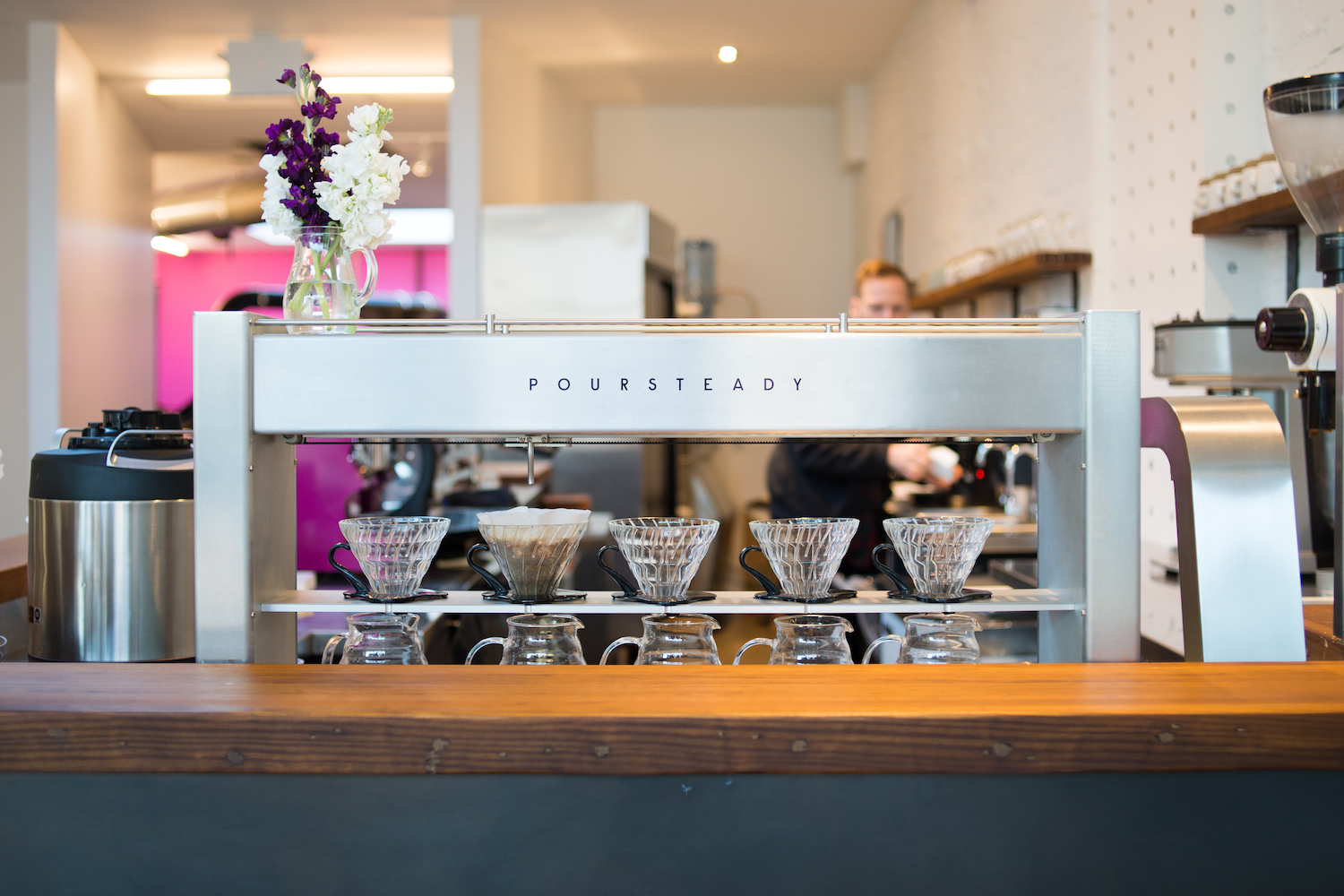 Poursteady
Poursteady brings speed, precision, and reliability to high-end commercial coffee retailers (and better coffee to discerning customers) by combining precision motion-control, elegant design and beautiful fabrication. The idea for Poursteady was born when two of the founders watched a busy barista attempt to make three pour-over coffees at once in a busy coffee shop in California. At the 2013 Maker Faire in NYC, Poursteady debuted the first prototype and made more than 800 cups of coffee. Since then, they’ve sold more 70 systems to coffee shops and offices everywhere that have in turn made hundreds of thousands of cups of coffee. Clients include Whole Foods, Cafe Grumpy and others. Poursteady is an NYCEDC Next Top Makers alumnus and Futureworks NYC Growth Initiative Grant awardee. Get to know Poursteady and join them on Instagram and Twitter. 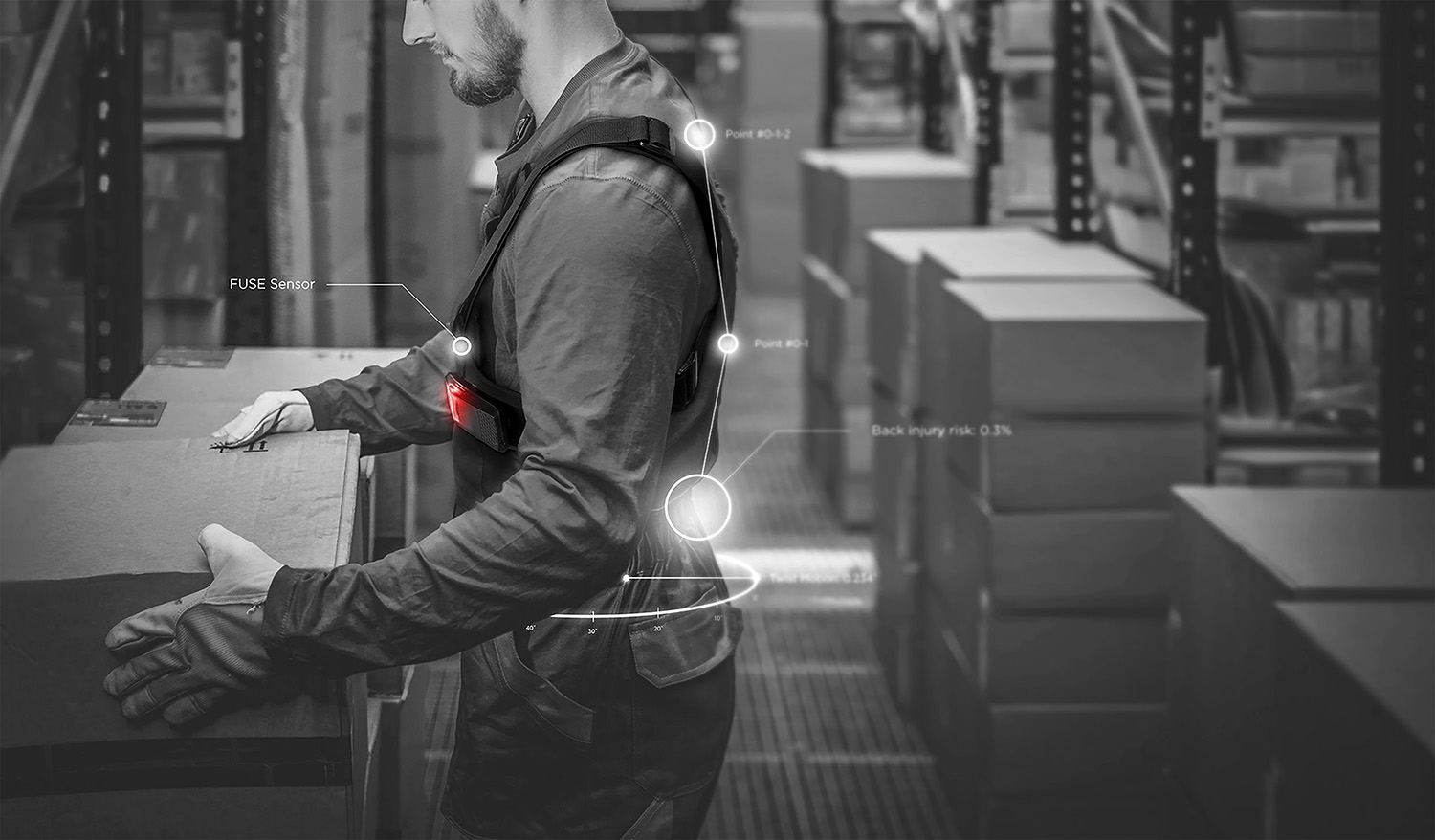 StrongArm
StrongArm is defining the field of Industrial BioTelemetrics – the science of human data collection and analytics to inform the development and delivery of precise interventions to improve safety, efficiency and productivity. In the unpredictable world of workplace injuries, StrongArm innovates with data science and smart algorithms to bring accurate safety insights and a peace of mind to the manual worker – who they call Industrial Athletes. StrongArm’s FUSE IIoT Platform assesses, diagnoses and predicts injuries before they happen, and the FLx and V22 ErgoSkeletons protect workers by improving lifting ergonomics and reducing lower back injury risk factors. Founder Sean Petterson launched StrongArm based on his experience with family members working strenuous blue collar jobs, and recognizing that the manufacturing worker rarely receives the training and support they need to ensure proper lifting mechanics. He is a Forbes 30 Under 30 awardee, and StrongArm is a Next Top Makers alumnus. Get to know StrongArm and join them on Twitter and Instagram. 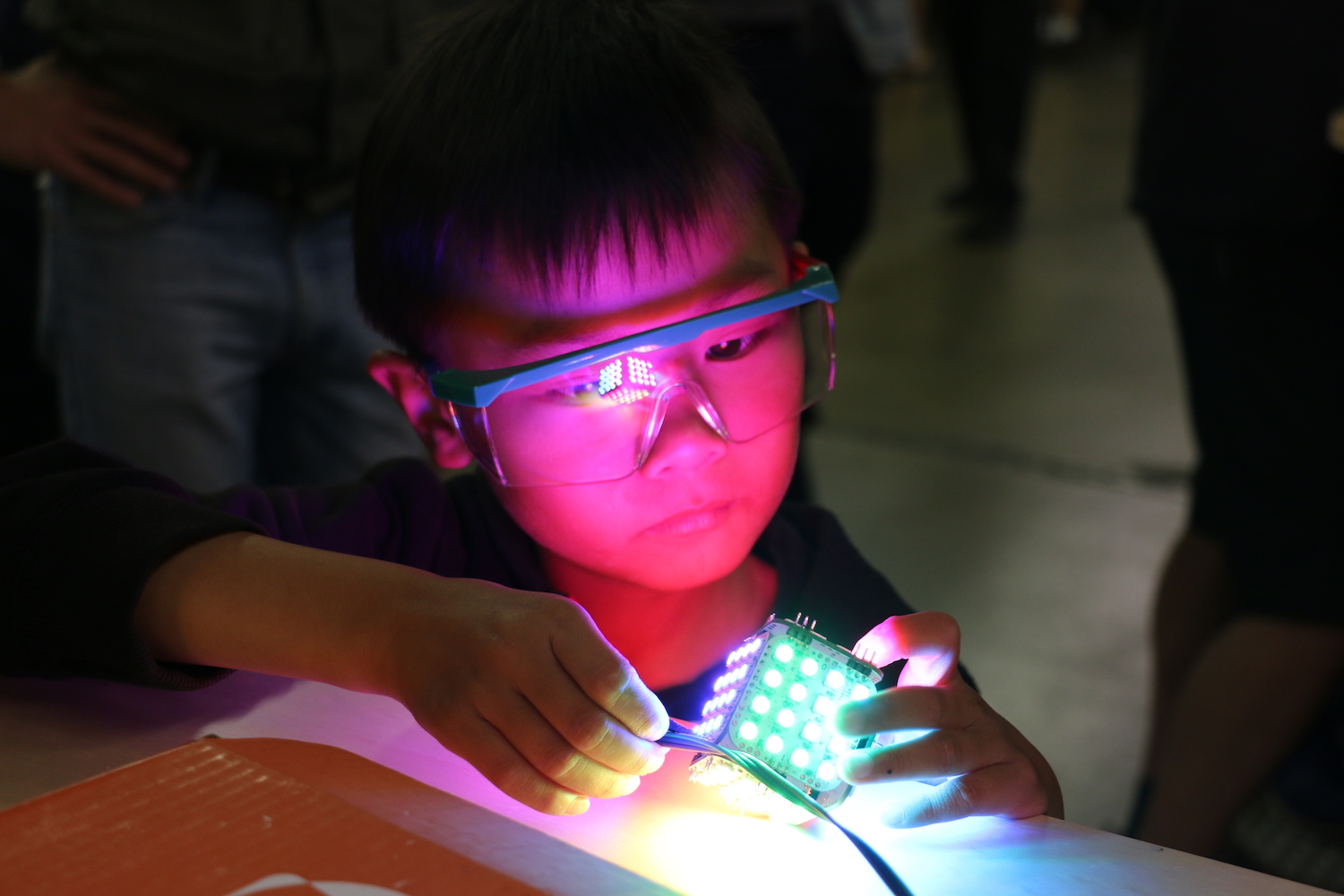 Thimble
Thimble is a subscription service that delivers DIY electronics kits to your door every month. Along with the kits, Thimble provides guidance, increasingly challenging projects and continuing education. Without helpful guidance and rewarding progression, users become disengaged with projects and end up not learning the material needed to get better and better. Founders Oscar Pedroso and David Brenner met while teaching electronics at a makerspace. Thimble is a Next Top Makers alumnus and raised $300,000 on Kickstarter. Get to know Thimble and join them on Twitter and Instagram. 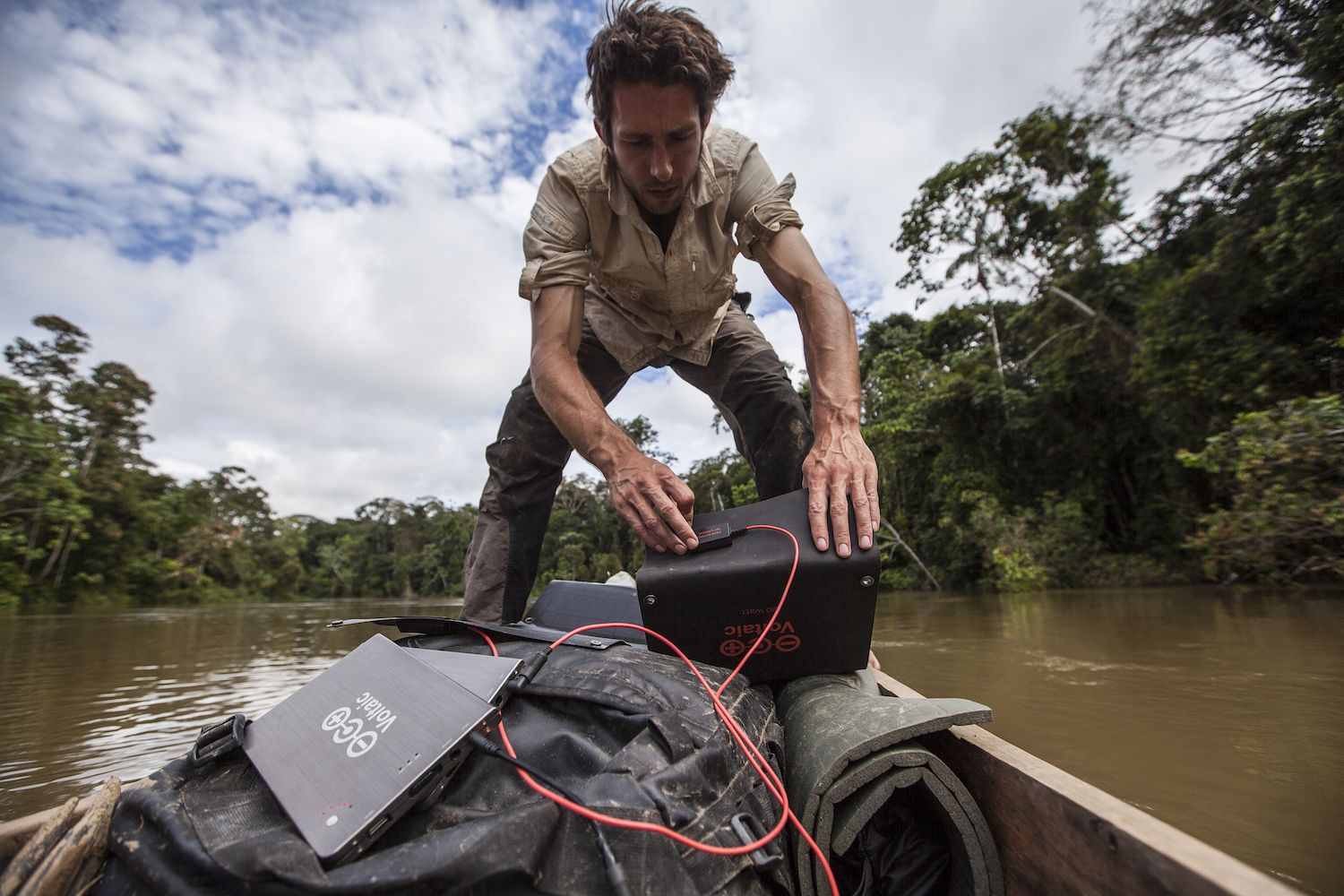 Voltaic Systems
Voltaic Systems is a Brooklyn-based solar company focused on small-scale charging solutions. The company was founded when it launched the original solar backpack, a new concept at the time which has since spawned a competitive new market. Their products are used for mobile charging by adventurers, aid organizations, and travelers of all types. Voltaic has also expanded its line to include solar panels and batteries for standalone use, particularly for IOT and industrial applications. More recently they designed and launched a line of solar lights, with a view to providing better solutions for developing countries and emergency situations. Founder Shayne McQuade is an Australian-born entrepreneur. Having worked in Tokyo, London and Melbourne, he settled in New York after coming for an MBA at Columbia University. Through Voltaic he continues to develop opportunities to leverage solar energy to promote social and environmental benefits. Get to know Voltaic Systems and join them on Instagram and Twitter.